Excalibur was the sword given to Arthur by the Lady of the Lake. Some sources suggest that Arthur gave it to Gawain. After Arthur’s last battle he made Bedivere return it to the water where it was grasped by a hand and drawn under. Its scabbard prevented the wearer from losing blood. When Gawain fought the magician Mabon over the fairy Marsique, she obtained the scabbard for him but it subsequently disappeared.

Excalibur was the magical sword given to King Arthur by the Lady of the Lake, and the sword that Merlin placed in the stone.

The Welsh name for Excalibur was Caladvwlch, equating linguistically with Irish Caladbolg, the name of a sword borne by heroes in Irish legend, derived from calad (hard) and bolg(lightning). 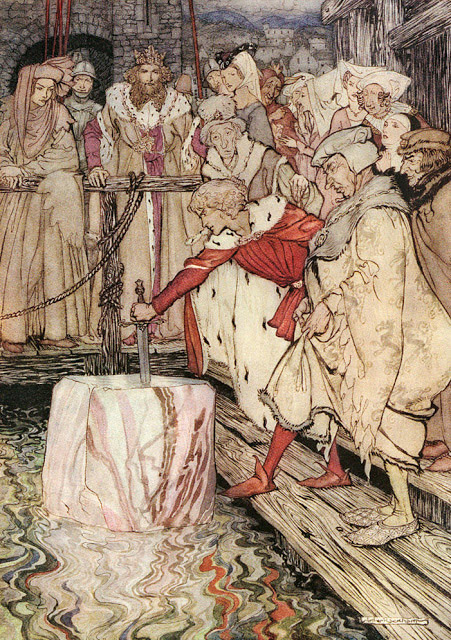 “How Galahad drew out the sword from the floating stone at Camelot.” Arthur Rackham’s illustration for Alfred W. Pollard’s The Romance of King Arthur (1917)