Who was Joseph of Arimathea?

Joseph of Arimathea was not only a prominent figure in the New Testament of the Bible, but legend records that he was the uncle of Jesus of Nazareth as well. Some of the stories say that Joseph was also a soldier of Pilate, and was given the Holy Grail, the cup that Christ used at the Last Supper. After the Resurrection, Joseph was thrown into a dungeon where Jesus appeared to him and gave him the Grail which he had lost after the crucifixion. When Vespasian’s army sacked Jerusalem and it fell, Joseph was released from prison along with his sister Enygeus and her husband, Hebron or Bron, and the trio went into exile along with a group of fellow travelers.

According to legend, Joseph of Arimathea not only came to Britain, but he eventually settled in Glastonbury and was gifted land by the King Arviragus.

According to legend, Joseph of Arimathea not only came to Britain to visit, but he eventually settled at Glastonbury and was gifted land by the King Arviragus. A local tradition says that Joseph buried the cup of the Last Supper above the spring in Glastonbury and hence the water has a red color to it. If you visit Glastonbury today you can visit the Chalice Well and Gardens, and taste the water for yourself.

A tradition amongst certain metalworkers was that, sometime before the Crucifixion, Joseph actually brought Jesus and Mary to Cornwall on one of his trading journeys. Joseph may be identical with Joachim, the father of the Virgin Mary in the Protevangelium of James, an apocryphal work; but the two names are quite distinct in origin. In the Estoire Joseph is given a son, Josephe. In Sone de Nausay he had a son named Adam, while Coptic tradition claims he had a daughter, Saint Josa. 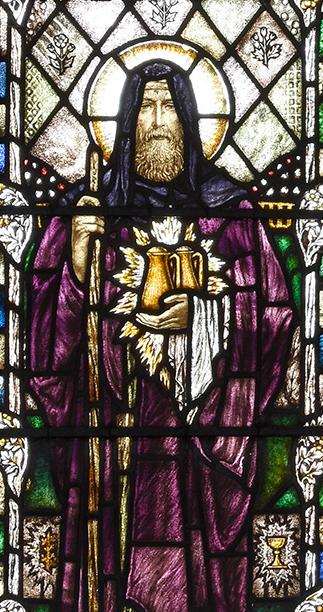 Joseph of Arimathea, from a window in St. John’s, Glastonbury.