Estimates of when Vortigern came to power in Britain vary dramatically: possibly around 425, perhaps about 440-5. He may have been a “high-king.” It is thought by some that Vortigern is not a name at all, but a title, meaning “over king.” Even his origins are disputed. According to the available sources, Vortigern was a weak man of little character, possessing few redeeming personal qualities. If these sources are correct, it is hard to imagine that his ascent to power was by the acclaimation of the members of Britain’s ruling council, and is much easier to believe that he gained his throne by treachery and murder.

Some support for this view is lent by Geoffrey of Monmouth, in his 12th century History of the Kings of Britain. In it, Geoffrey tells us of a King Constantine, who had three sons, Constans, Aurelius Ambrosius (the Ambrosius Aurelianus of actual history) and Uther Pendragon (the future father of Arthur). Geoffrey says that Constantine was killed by a Pictish assassin, leaving the eldest son, Constans, as king.

Vortigern appears to have climbed his way high up the greasy pole by securing an inspired marriage to Severa, the daughter of the Constantine’s predecessor and national hero, Magnus Maximus. As Constans was still quite young, Vortigern was able to have himself installed as the king’s advisor, and before long, conspired to have the young king killed. With the king out of the way, Vortigern seized the crown for himself, realizing that Aurelius Ambrosius and Uther Pendragon were mere babes and weren’t in a position, at that time, to frustrate his designs. Luckily for the young brothers, they were bundled up and escaped to the court of their cousin, Budic I, in Brittany.

According to Geoffrey of Monmouth, Vortigern was able to weasel his way to the crown by having King Arthur’s uncle, Constans murdered.

According to the Historia Brittonum, a ninth century compilation of writings by a Welsh monk called Nennius, Vortigern came to power threatened with three dangers on his mind:

“Vortigern ruled in Britain and during his rule in Britain he was under pressure, from fear of the Picts and the Irish (Scots), and of a Roman invasion, and, not least, from dread of Ambrosius.”

The fear of the Picts and Scots was completely natural since the British northern defenses were ineffective and in severe disarray. The fear of a Roman invasion suggests either great paranoia on Vortigern’s part (the Romans had had no presence in Britain for years) or that there was very good reason (of which we are ignorant, today) to be concerned about a reappearance of Roman soldiers on the shores of Britain. The final fear, of Ambrosius, was to have fatal consequences. Vortigern dreaded retribution, for the murder of his father and older brother, but Ambrosius was still young and the High-King could afford to defer any action for some years.

It was during Vortigern’s reign that St. Germanus appears at the Royal Court. Traditional this is said to have been St. Germanus of Auxerre, who is known to have visited Britain at this time to stamp out the Palagian heresy that had become so popular. His first journey took him from Caer-Rebuti (Richborough) to Caer-Lundein (London) and Caer-Mincip (St.Albans), all in South-East England. However, stories of his leading an army against invading Saxon pirates, probably in Cheshire, may refer to a different man. The saint who spent some time in Vortigern’s presence – probably at Caer-Guricon (Wroxeter, Shropshire) where excavation has revealed the residence of a powerful 5th century noble – may have been the Breton St. Garmon who was active across Wales. This saint accused Vortigern of fathering a child by his own daughter. Though disgusted by the British High-King, Garmon – or Germanus – favoured the man’s sons, at least two of whom he appears to have blessed.

Even with the support of his brothers-in-law, who were now powerful rulers in Wales, Vortigern’s grip on the country was still shaky; but when Severa died the situation worsened. To aid the Britons in their defense against the increasingly brutal raids from the northern tribes, Vortigern therefore authorized the use of Saxon and Jutish mercenaries, led by Princes Hengist & Horsa. In line with the standard Roman practice of employing one barbarian tribe to defend against another, the Saxons received land to be used for settlement in exchange for their services.

Geoffrey of Monmouth claims that the two brothers asked for all the land they could cover with a single ox-hide. Vortigern eagerly agreed, but found that Hengist cut the hide into a lengthy thong that was able to encompass the whole city of Caer-Correi (Caistor, Lincs)! Vortigern must, however, have found reassurance in the words of the Jutish chief, as recorded in the “Kentish Chronicle“:

“Hengest said to Vortigern. . .’Take my advice, and you will never fear conquest by any man or any people, for my people are strong. I will invite my son and his cousin to fight against the Irish, for they are fine warriors.'”

The anti-Pict/Irish strategy that Vortigern chose to employ proved to be successful, since these tribes were never a problem, again, and the arrangement between the Saxons under their leader, Hengest, and Vortigern was agreeable to both parties for some time. Later, however, they tricked the High-King again: this time into handing over to them the Sub-Kingdom of Ceint (Kent). Getting drunk at a celebratory feast, the foolish Vortigern fell deeply in love with Hengist’s daughter, Rowena. He promised Hengist anything he wanted, if only he could marry her. Ceint was the Saxon’s price.

Sickened by the betrayal of his countrymen, Vortigern’s eldest son, Vortimer, declared himself a rival British leader, raised an army and, for a short time, managed to stem the Saxon advance. Wounded in battle, however, he was poisoned by his step-mother. From their secure power-base, the Saxons then demanded more food and clothing to supply their increased numbers and Vortigern refused them, saying, “we cannot give you more food and clothing for your numbers are grown.” The Saxons, however, would not accept this answer. Nennius tells us,

“So they took counsel with their elders to break the peace.”

They tore through the land, leaving devastation wherever they went. Many were killed during the ensuing battles, amongst them, Horsa & Vortigern’s son, Catigern. Hengist eventually called for a peace conference on Salisbury Plain. The British arrived and were promptly cut down where they stood. This decision on the part of the Saxons would result in several generations of war with the Britons.

Vortigern escaped to set up a stronghold in the west. He chose to build a castle on the southern slopes of Yr Aran, above Beddgelert (Gwynedd). Construction began. However, every morning the previous day’s work was found demolished. Vortigern’s magicians told him to seek a boy with no father, born of the fairies. He would be able to solve the High-King’s problem. Vortigern’s men searched far and wide and discovered such a boy at what was soon to become Caer-Fyrddin (Carmarthen). His name was Myrddin Emrys, or “Merlin” for short. Merlin revealed that at night the mountain shook so that all buildings collapsed, because beneath it were buried two fighting dragons. One white representing the Saxons and one red representing the British, and the white one was winning! Afraid of such an omen, Vortigern fled.

Disillusioned, the British finally rebelled against their High-King. Ambrosius Aurelianus (Emrys Wledig), of whom Vortigern had previously had no fear, had by now grown into a burly young man and took his place in the events of the time to lead their struggle. Merlin handed over to him the mountain site where Vortigern had failed to build, and it became his fort of Dinas Emrys. Vortigern took refuge in the refortified hillfort of Tre’r Ceiri in Yr Eifl (the Rivals) in Lleyn, but Ambrosius pursued him and drove him south, via Nant Gwetheyrn and the sea to Ergyng and a wooden castle on the old hillfort of Caer-Guorthigirn (Little Doward) above Ganarew. Here, the castle was miraculously struck by lightning and Vortigern burnt to death! He was later buried in a small chapel in Nant Gwrtheyrn (Lleyn).

Thus, it was left to Ambrosius Aurelianus to halt the Saxon advance. 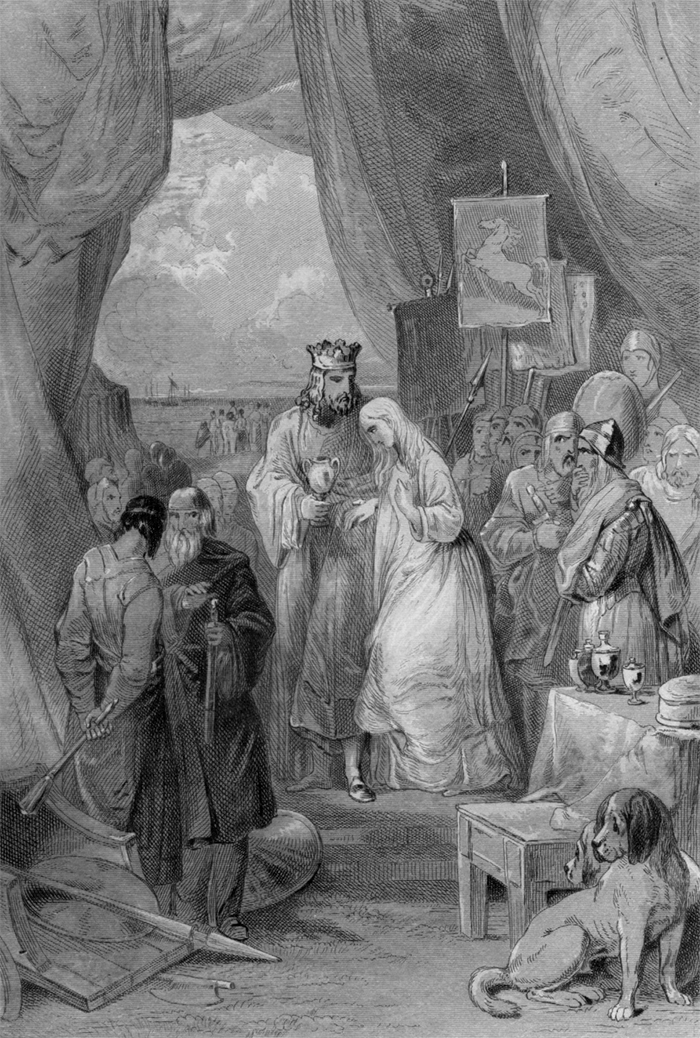 Vortigern and Rowena by William Harvey