Igraine comes from the Welsh name Eigyr. She was the mother of King Arthur and the daughter of Amlawdd. She married Gorlois, by whom she had a number of daughters. (This husband is sometimes called Hoel.) Uther Pendragon had a relationship with her while he was under a spell which made him resemble her husband. That night Igraine conceived Arthur.

Igraine had a relationship with Uther Pendragon while under Merlin’s spell and conceived of Arthur.

Later, after the battle when Gorlois was dead, Uther married Igraine. She never did see Arthur after he was first born, however, as he was given by Merlin to Sir Ector to raise as his son. There was another Igraine mentioned in the Vulgate Merlin who was the sister of Arthur. 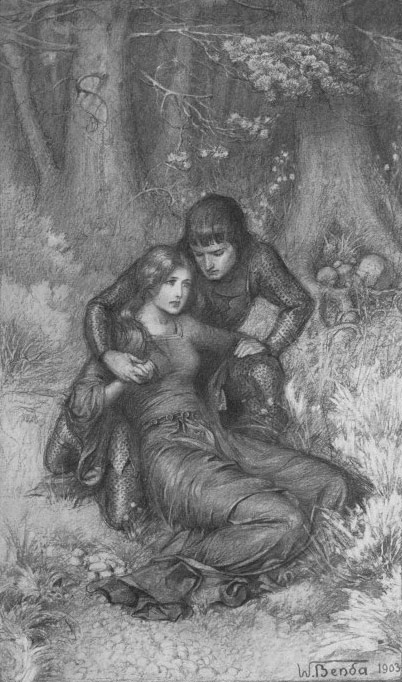 Uther clasps Igraine, after Gorlois’s death. “Shall I not be your wife?” from Uther and Igraine, Warwick Deeping, illustrated by “W. Benda”