Lady of the Lake

Who was the Lady of the Lake?

Who was the mysterious woman who not only gave King Arthur his magical sword Excalibur, but kidnapped Sir Lancelot as a child only later to cure him of his madness? The Lady of the Lake may have been a Celtic goddess in origin, perhaps even related to the Gwagged Annwn, the lake ferries in modern Welsh folklore. According to Ulrich, a fairy raised Sir Lancelot from birth and was the mother of Mabuz, identical to the Celtic god Mabon. There are several “Ladies of the Lake” mentioned throughout Arthurian Legend, with even Morgan Le Fay being named as one of them, in particular as she is one of the maidens on the barg that takes King Arthur to the mystical Isle of Avalon.

Vivien may very well have been the true Lady of the Lake that is talked about in most Arthurian legends and stories. Vivien, sometimes called Nineve, Nimue, or Niniane is best known as the woman who sealed Merlin in a cave or a tree and put him under a spell. Richard Wilbur referred to Vivien as “a creature to bewitch a sorcerer”, and even though Merlin could foretell and foresee his captivity, he was unable to stop it or overcome his enchantment with Vivien. In Sir Thomas Mallory’s book Le Morte D’Arthur, Nyneve, another of the ladies of the lake, deprives King Arthur of Merlin’s services, but then rescues him twice later on. The first rescue is from Accolon, who has been given Excalibur Morgan Le Fay to use against the King. The second rescue is her coming to the aid of Merlin and preventing his wearing of the destructive cloak that Morgan Le Fay sent to him to wear.

Who was the mysterious woman who not only gave King Arthur his magical sword Excalibur, but kidnapped Lancelot as a child only later to cure him of his madness?

The Lady of the Lake’s character is super ambiguous, even in her most early appearances in the legends and stories. In the French Vulgate Estoire de Merlin, she loves the enchanter and seals him in a beautiful tower, magically constructed, so that she can keep him always for herself. She would visit him regularly and ended up giving her love to him. In the continuation to the Vulgate Merlin, known as the Suite du Merlin, the relationship is very different. When Merlin shows her a tomb of two lovers, magically sealed, she enchants him and has him cast into the tomb on top of the two lovers, whereupon she reseals the tomb and Merlin dies a slow death.

Alfred Lord Tennyson turns Vivien into the personification of evil. Edwin Arlington Robinson, in the poem, Merlin, makes Merlin’s “captivity” voluntary, and his Vivian is less of an enchantress than an interesting woman whom Merlin truly loves. So, who is the Lady of the Lake or Vivien? Was she good, evil or a bit of both? Perhaps she was a combination of many imaginative tales, and came to be popularized as one of the primary characters of the Arthurian legends. 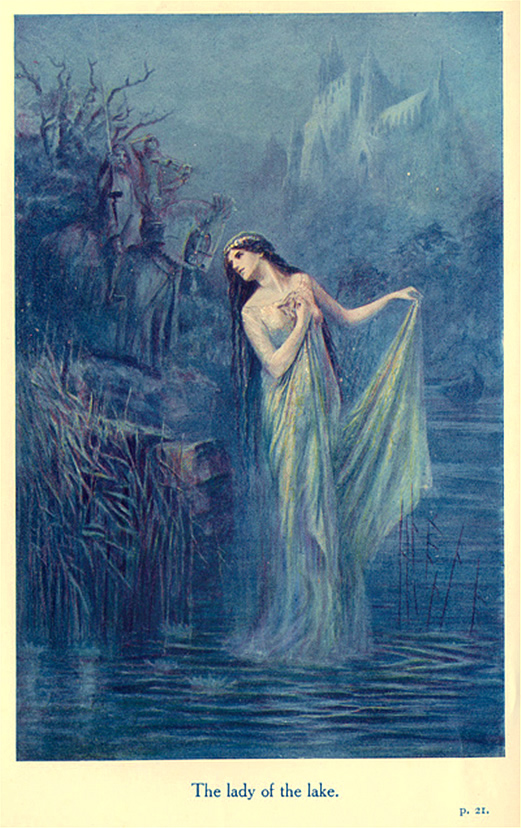 The Lady of the Lake from the The Legends of King Arthur and His Knights, published in 1912.